Creating an Idyllic Life in Adakavas 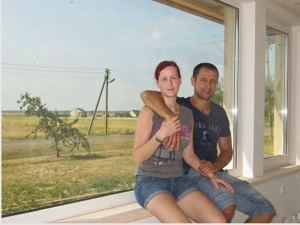 We recently had an article featured in our local newspaper, Tauragės Žinios. We’ve done our best to translate it for you. Some phrases just don’t translate that well – I hope we haven’t lost any of the original content or sentiment with our translation. Enjoy!

From his native Adakavas a decade ago, like many Lithuanians at the time, Arūnas Vladička decided to go abroad to work. Although he planned to spend only a few months in Ireland, while there he met his future wife, June Molloy, and ended up staying for longer. Now they are creating their idyllic life back in Adakavas. June bravely, albeit with an accent, speaks some Lithuanian. They are about to finish completing their new home beside Arūnas’s parents’ house. It’s easy to sense from the couple how much it all means to them – the house renovation, the fresh Lithuanian air and life without constantly rushing.

Not everyone understands
On Tuesday, when we visited the family home, there was a great atmosphere. Arūnas says that in a few days they are expecting to move into the new home. Their faces glow – clearly showing that June and Arūnas embrace the little things, creating for themselves a life that many of us can only dream of. They do not pay the slightest attention to any skeptical and questioning glances they receive.

Arūnas says they are often asked why they are building their family nest in a rural area of Tauragės, but the smiles on their faces are the best answer – they are simply happy here.

Went away to work – brought home a wife
Arūnas nostalgically remembers their first meeting. He explains how a decade ago he met his future wife, June, in Co. Clare, in a local bar where he was drinking with friends after work. Their unexpected meeting was crowned three years later with a wedding.

Arūnas told his how, in Dublin, he worked for a time as a personal trainer, then later had his own clinic where he practiced neuromuscular therapy.

Together, this couple have seen and done a lot so far – they have travelled a lot and seen many countries. June’s sister lives in Australia, so the couple also considered moving there. However, considering the distance and difficulties keeping in contact with people back home, as well as the fact that Australia is quite expensive, they decided against it.

Now they are enjoying the sense of freedom, peace and quiet that they found in Adakavas. Asked if she sees any major cultural differences, June says it’s harder to connect with Lithuanians. She says Irish people are more open and friendly – always ready to say hello and to chat.

Wife is considering a bigger farm
They couple have been in Adakavas for about a year now and are almost finished renovating their home. They have started to grow fruit, vegetables and herbs and they bought 12 hens. Arūnas said it was not a big cultural shock for June to come and live here as they have been visiting his homeland regularly over the years. They are married now for seven years. Arūnas says that the most important thing right now is to finish the house and then they will figure out what they will do for a living.

Arūnas joked that June would like a much bigger farm with cows and pigs, but for now they have enough with what they have. He told us that in general his wife’s passion is everything to do with food – including cooking from scratch and growing a variety of crops – and that possibly this might gradually turn into an additional source of income. She already has her own blog, where she shares a wide variety of photos, recipes, moments of family life in the village and their travel experiences. For more details see http://www.adakavas.lt or https://myfoododyssey.com/. It includes very positive emotions, new experiences and discoveries – I have no doubt you will find something you like there.

High praise for Lithuanian countryside
While we’re talking to June and Arūnas, the smiles never leave their faces. I get the impression that they are always this optimistic. Arūnas says that their philosophy is to start with yourself and how you look at life. According to him, if you want you can see only the negative things, but if you choose can always see the bright colours in everything.

In essence, if you decide to be negative you will only see the negative around you, not even realising what you’re doing. He was saying that, for example, we do not watch TV and choose very carefully the information we let into our heads. And we live a lot healthier for that.

“Sun, forests, fields – it’s beautiful here”, echoed his wife, who likes walks in the countryside on hot summer days or relaxing at a nearby river enjoying a barbecue.

Arūnas believes that many Lithuanian’s live more to show what they have than for themselves. Lithuanians are quite closed, often feeling unhappy, which he said he particularly noticed when in Ireland. He recounts many stories of Lithuanians overseas who work hard to receive a good income, but who are locked in small groups, avoiding integration and thus feeling alienated from Irish society.

Many of them would like to come back to live in Lithuania but don’t know what to do here – they have become used to an easier life and easier money. Of course, they can afford much more in Ireland, but their hearts remain at home.

Speaking about life in Adakavas, Arūnas says that to live here is quite cheap, especially as the couple use natural food that they grow in their own garden.

Considering several options for the future
When asked to imagine their lives in five or ten years, June and Arūnas said they were looking at several options. They might start their own business as Arūnas has experience in the health industry and June is also a qualified massage therapist. Another option is for June to continue developing her blog and possibly create a food product.