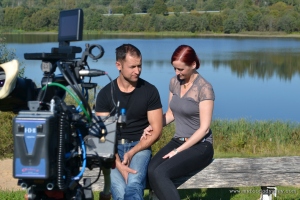 We were the talk of the town. Probably still are. I mean, who do we think we are? Adakavas is about the size of a teaspoon and very little out of the ordinary happens here, so when TV cameras roll into town it gets everyone’s attention. It wasn’t enough that we bought a house out from under a poor 94-year-old woman, then tore it down to remodel, but now we were making a TV programme about it – sacrébleu!

It wasn’t our idea – they came to us. House Hunters International had heard of our search for a home in Lithuania and asked if they could help us find a property and document our journey. I’m not really one for cameras, so the thought of being on TV didn’t immediately appeal. Before knocking the idea on the head completely I decided to do a little research. It turns out that House Hunters International is a nightly prime time programme on HGTV, a cable channel that goes out to nearly 100 million homes in the US. That’s a whole lot of exposure for me and my little blog. To hell with camera-shy – I’ll do it! 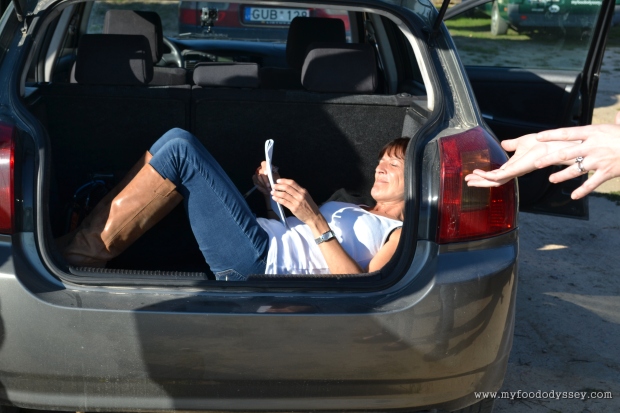 Alicia, the director, hides in the boot to give instructions as we drive.

After several months of communicating back and forth (and a few comical casting videos) we agreed on dates for the filming. The show follows us as we view a number of potential properties around Lithuania looking for our dream home. There were a couple of mammoth interviews covering our life back in Ireland and our reasons for moving to Lithuania. Having watched a few episodes of the show I know that the background story is interspersed between house viewings and only accounts for about 5 minutes of the full programme. Our director told us it takes about 1 hour of filming for every minute of TV. No wonder those movie stars get paid so much!

We did take after take from this angle and that, close up and wide, individually and together. It was quite difficult as we’d walk into a house and give our genuine reaction, chatting between ourselves about the various features. After about 10 minutes the director would say “Ok, that’s great – well done guys. Now let’s do it again, this time focusing on June.” Are you kidding me? I can’t remember what I said 10 seconds ago, never mind a full 10 minute conversation complete with wisecracks and physical reactions on finding particular features in a property. 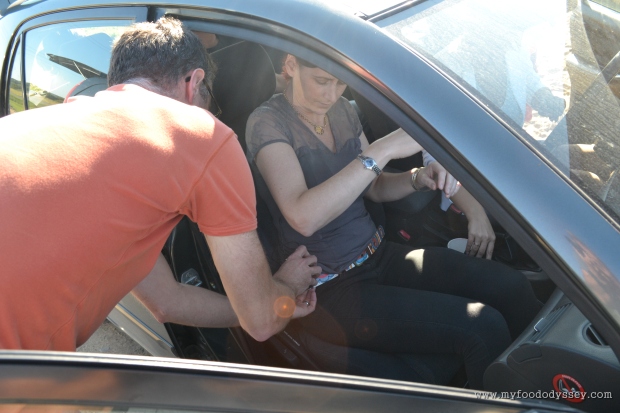 The sound man fixes my mic. 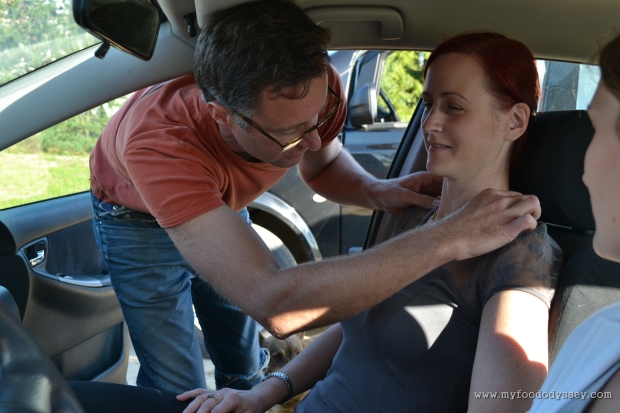 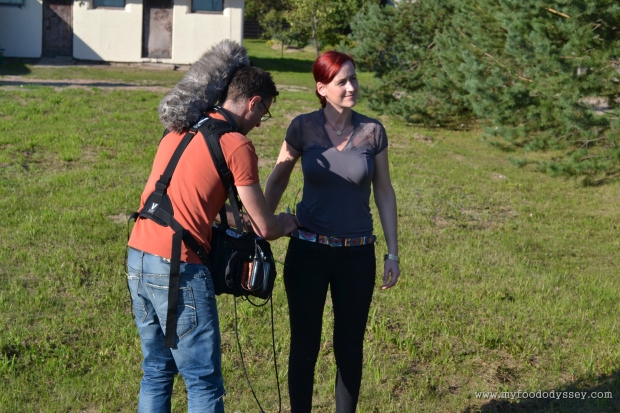 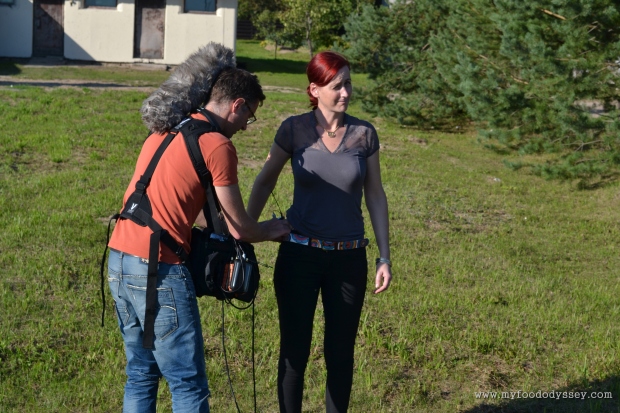 The process was tiring but really good fun. The crew was small – the director, camera man, sound engineer and local fixer. They were a great bunch – enthusiastic and friendly – and they kept us well motivated over the 5 days of the shoot. By the end of the week I had developed a new respect for all those involved in unscripted reality TV shows. Now every time I watch Masterchef or Hell’s Kitchen I think of the number of times that poor girl had to faint before they got the right shot!

Naturally, I got to do a little cooking. I was trying not to sound like Darina Allen or Nigella Lawson as I talked Arūnas through making šaltibarščiai. We invited about 10 of our friends round for dinner and I cooked for everyone, including the crew – my first mega meal in my brand new kitchen. It stood up to the task beautifully – all those hours of planning and design had resulted in a pretty perfect kitchen.

(Don’t worry – I haven’t forgotten you all want photos of the house now that the renovations are complete. They’re coming soon – I promise!) 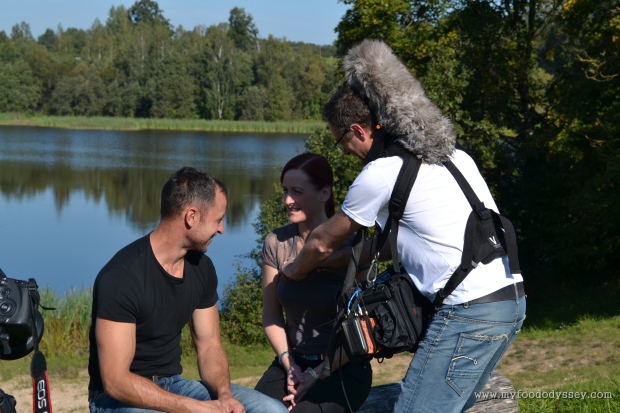 Arūnas finds it all very amusing… 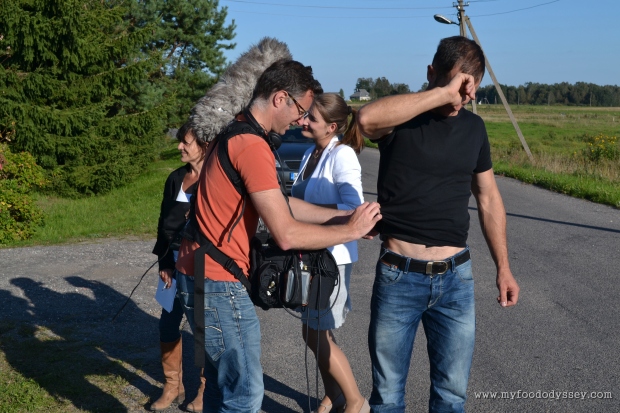 Until the tables turn! 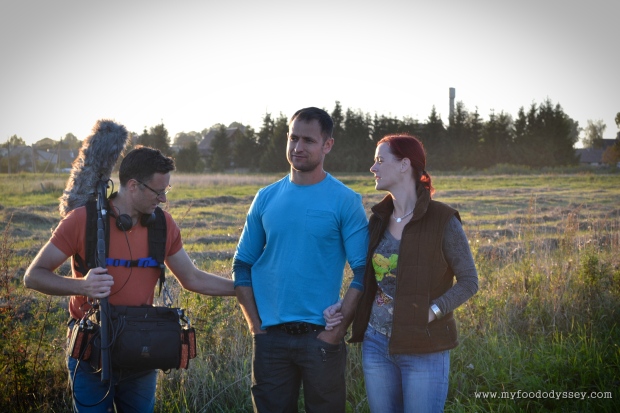 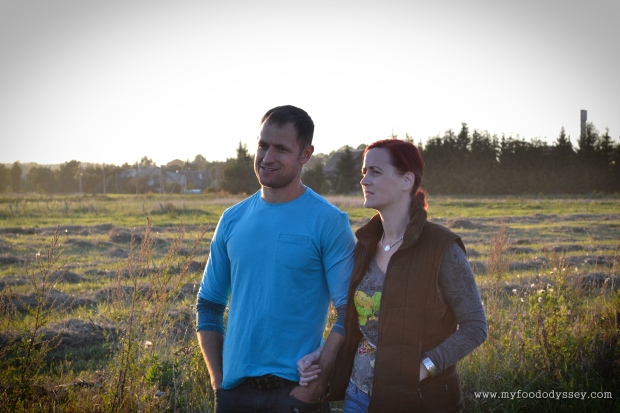 “If he touches me one more time…”

We’ve been advised that post production takes about four months so our episode should be airing early in the New Year. I’ll keep you posted and as soon as I get a copy (and permission!) I’ll put it up on YouTube for those who don’t have access to the channel. My 10 minutes of fame is finally on its way. Wish me luck!

PS: The sound man was an absolute gentleman and did his job brilliantly. The repetition just got funny! Many thanks to Arnas, our fixer, for capturing these moments so beautifully. 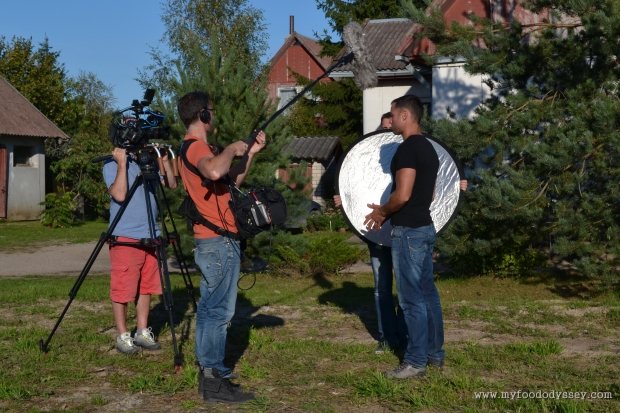 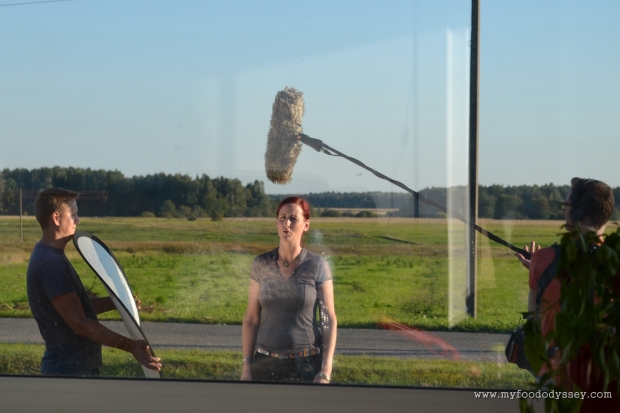 Me in action. The director was complaining about the noise of the camera, so this was taken through the window, 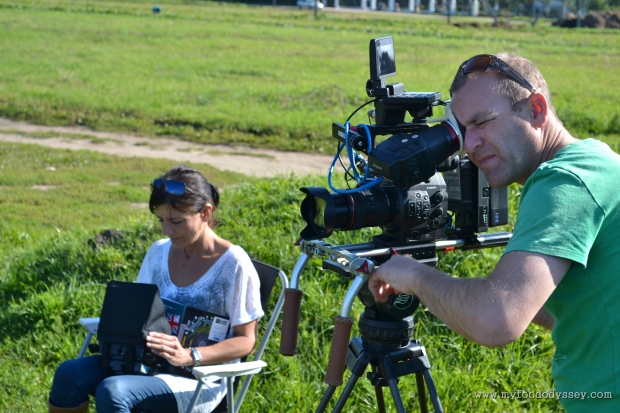