Death of a Ladies’ Man

We both knew it had to be done but we had been procrastinating for weeks. Months, if I’m honest. He was a menace and he needed to go, but somehow neither of us had the heart to do it.

The trouble started the day he arrived, when he had a run-in with the dog. I can’t say who started it but I know who came off worst – it took nearly six months for his tail to grow back.

Before he arrived, things had been blissful. My girls were young and timid and I loved being in their company. We put a small stool in the chicken run and I used to sit amongst them drinking my morning coffee. They would peck around my feet and even from my hand and I had no fear of them whatsoever.

Then, Beelzebub arrived. We had no plans to breed our hens – they were for eggs only – so we hadn’t considered getting a cock, but our neighbour suggested the hens might be happier with a cock around and gifted us a young cockerel just on the cusp of adulthood. I had no prior experience of cocks and just assumed he would behave like the girls, so when he first attacked me I was completely taken by surprise. 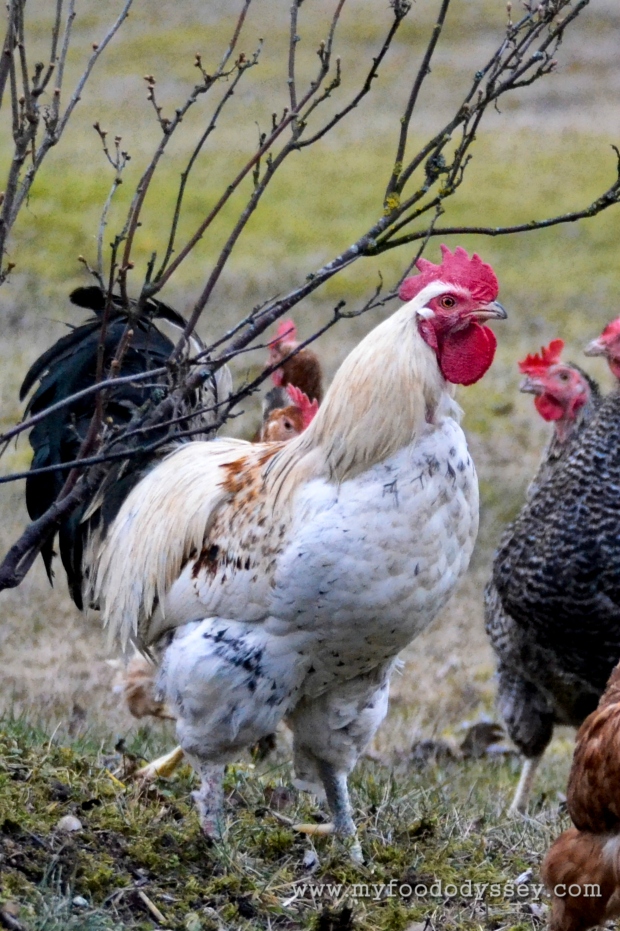 Over time, his aggression grew stronger. I tried to deal with the aggression head-on, but that just didn’t work. I ended up carrying a small wooden frame (that we had built for the girls to roost on) around the run with me as a guard rail. Even at that I had to constantly keep an eye on him as the moment I would put the frame down and start to fill the feeder or gather eggs he would try to run around the frame. It was awkward and off-putting. The run that had once been a place of peace and calmness was now a place I hated going.

Everyone we told of our cock woes advised us to simply eat him. For reasons I can’t quite put my finger on, we didn’t want to do that. It’s strange because we planned to keep chickens for meat, but this felt different somehow. Being dinner wasn’t his raison d’être. He was the hens’ protector, even if he did take his job a little too far. We tried giving him away but no one wanted a feisty cock. We were running out of options.

Two things happened that moved us towards our final decision. Firstly, the snow melted and the weather got warmer, so we moved the hens from their indoor run, where they had spent the winter, to their outdoor run and resumed our practice of giving them free range of the garden in the afternoons, once egg-laying was complete. On several occasions as I was working in the garden, far from the chickens, the cock would run at me from nowhere. It had me constantly on my guard.

Not my most fetching outfit, but functional nonetheless.

Secondly, Arūnas left for a week to bring our camper back to Ireland. Over the winter Arūnas had been taking care of the chickens as I refused to go into the small indoor run with the cock. He had continued looking after them even after we moved them back outside but now I would have to brave the run myself. I promised myself I would try it for the week to see if he was really as bad as I remembered him being.

Alas, he was. Looking after the chickens was incredibly awkward. Because I didn’t want to go in and out a number of times I would carry the feed and water in with me. Trying to carry two buckets plus the wooden frame and the rake I held for protection all at the same time was almost impossible. The ground was muddy and I slipped more than once, having no free hand to balance myself. There was no joy in this.

So, reluctantly, the decision was made. He would be dinner. I had never processed a chicken before but have been gutting fish for as long as I can remember and I watched my father process pheasants and rabbits as a kid, so I knew I would be ok with it. The problem was getting to that point. Every day we came up with a new excuse. We don’t have enough time today, we already have something for dinner, it’s very windy – the feathers will go everywhere. 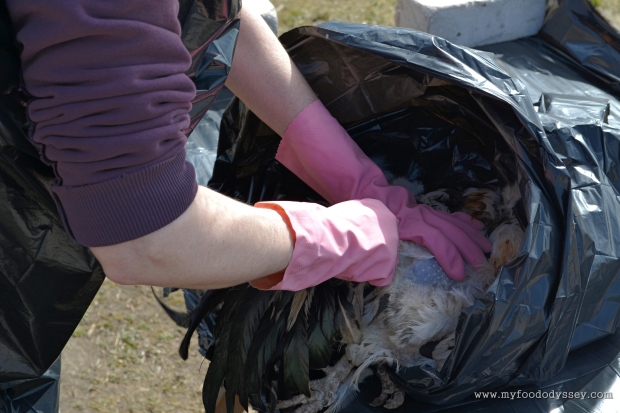 I plucked the same way I would descale fish – inside a plastic bag.

Having being chased round the garden once too often the final decision was made. Tomorrow. No procrastinating – let’s just get this done. In the end his departure was swift and painless. Arūnas, who had dispatched many chickens in the past, took care of that element and presented him to me for processing. Once he was dead my mindset changed completely and processing him was no different from the fish I was used to cleaning. I didn’t flinch, I just got it done.

Beelzebub’s last gift was two delicious meals. Being about 1½ years old and an active bird he needed long, slow cooking. I was surprised how small he was once he had been full cleaned – he weighed just 1.6 kg (3.5 lb), had a flat, firm chest and strong, muscular legs. I decided to make chicken noodle soup – the slow simmering would gently soften the meat and the cooking liquid would be incredibly flavourful.

We were not disappointed with the results. Both the taste and texture were different from regular chicken, as we expected they would be given that he was an organic, free range and active cock. It had a slightly gamey taste and smell and the leg meat was much darker than regular chicken. We made a large pot and so had leftovers for the following day. He tasted even better the second day as the flavour had fully melded into the cooking liquor.

I’m still getting used to the silence around the house in the mornings. I can’t say I miss the crowing, but I am noticing that it’s not there. I was worried that the girls might miss their man but they seem very chilled out. Given that almost every egg I cracked onto the pan during Beelzebub’s reign had been fertilised they are probably enjoying the peace as much as I am! 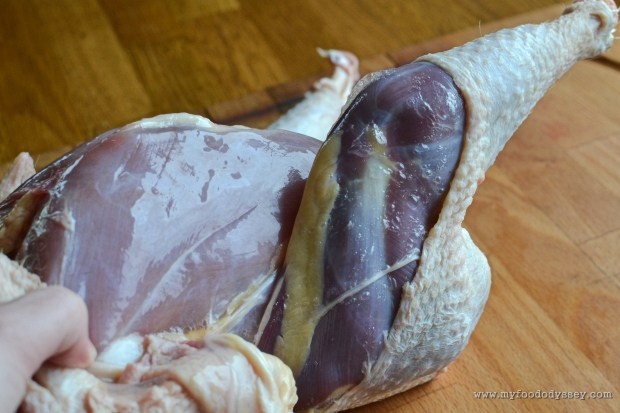 Muscular legs and a firm, flat chest indicate he led an active life.