No Turkey This Christmas 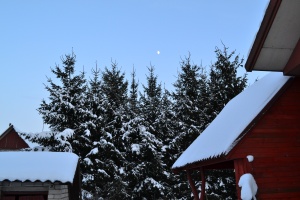 There’ll be no turkey for me this Christmas. In fact, there’ll be no meat at all. I’m spending Christmas with my in-laws in Lithuania, where the main celebration is on Christmas Eve rather than Christmas Day.

In Lithuania, the traditional Christmas Eve dinner (called “Kūčios”, pronounced “koo-chos”) consists of 12 meatless dishes. There is some debate as to the origins of the 12 dishes, with some saying they represent the 12 apostles and others saying they represent the 12 months of the year. Given that the Lithuanian word for Christmas is “Kaledos” which is from the Latin “Kalendai”, meaning “Calendar”, and given that Lithuanian Christmas traditions have their roots in pagan winter solstice celebrations, I’m inclined to hold with the latter.

The exact make-up of the 12 dishes varies from house to house, but generally includes pickled herring, fried or roasted carp, mushrooms, beetroot, carrots, cabbage (usually as sauerkraut), potatoes, stuffed eggs, and for dessert, a stodgy cranberry drink known as Kisielius and bite-sized biscuits called Kūčiukai, which are made with poppy seeds. These are all foods that would typically be available in the depths of the harsh Lithuanian winter, with mushrooms having been dried or pickled at the height of their availability in autumn, root vegetables stored underground to protect them from serious temperature fluctuations, and carp being caught by determined fishermen who set up camp over holes in the frozen lakes.

I volunteered to cook the festive meal for the family and having spent the last six weeks researching recipes for dishes that would typically be served as part of an Irish Christmas dinner. I have read countless versions of turkey, ham, mince pie and pudding recipes and thought myself utterly prepared for festive feast preparation. Now that I am faced with preparing a completely different kind of meal, I am suddenly thrown into the unknown. With the added (and unwelcome) discovery that the oven doesn’t work, my little cook’s brain has gone into overdrive. I have tried searching online for traditional Lithuanian recipes. Google keeps trotting out the same list of dishes with not a sign of a decent recipe (or certainly not one in English). I’ve eaten carp only once, so my knowledge of it is limited. It looks a bit like bream so my inclination is to roast it with some garlic and lemon. Alas, no oven. I suppose I could fry it, but if I’m frying fish I’d really prefer it was a fish I’m familiar with. Having grown up by the sea, and living in Dublin where excellent fresh seafood is available in abundance, my experience is mainly with sea fish. Unfortunately, with only about 60 miles of coastline, fresh sea fish is in very short supply in Lithuania, particularly in winter. That which is available is over-priced and generally not in the best of condition.

So, after much deliberation we have decided on the following:

If I can stand up after all that I’ll post a few pictures of the final dishes.

I have to say I’m very much looking forward to it and not mourning the absence of turkey and ham in any way. For me, Christmas is all about being with family and this is very much a family affair.

NEW! Lithuanian Cookbook:
You can now find all the Lithuanian recipes featured on this site, including my recipe for Kūčiukai, in my new cookbook. This beautiful 77 page book also contains stunning photos of the Lithuanian countryside. Available from just $2.99 here.