Fair warning: This post contains descriptions and images of animal butchery that some readers may find offensive. Reader discretion is advised.

Meat. It’s delicious. I love it. I don’t, however, love how much of the world’s meat is managed. Anyone who has seen such programmes as “Food Inc.” will understand the impact that intensive farming of animals for meat has on the lives of the animals, the quality of the meat produced and on the environment. This is not the kind of meat I want to eat.

One aspect of self-sufficient life that I am most looking forward to is the opportunity to rear our own meat for the table. Our animals will live happy lives, roaming open pastures and foraging for food. Their endings will be swift and stress free after which, out of respect for the animal, ever single scrap of the carcass will be put to good use.

As yet we’re not quite in a position to keep animals. We need to sort out some barn space and build a chicken run. Winter in Lithuania is bitterly cold and animals need to be kept indoors for most of the winter months. I have never kept animals before and have so much to learn about how to keep them nourished, happy and contented. Add to that the fact that it’s my own first winter here – I need to figure out how to manage for myself in these temperatures before I take on sub-zero animal husbandry. 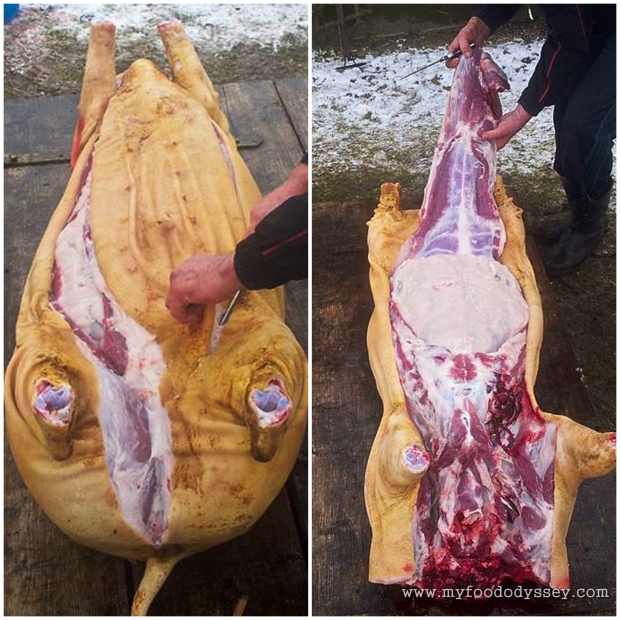 While we must, for now, continue to source our meat elsewhere I am still keen to get my schooling underway. We prefer to eat only organic, free range meat and so we decided to buy a pig from a nearby organic farm and butcher it ourselves. In Lithuania you do not need any special license to slaughter animals for your own personal consumption. However, while we’re ready to roll up our sleeves, neither my husband or I has enough experience to humanely slaughter and process a fully grown pig. We found a local man, Tomas, with over 30 years experience processing pigs who agreed to take on the job.

The pig we’d sourced was quite large – about 120 kg – which was far more than we needed for the two of us. Half of that would fill our freezer and keep us in meat for many months. We asked around and one of our friends, Donatas, agreed to take the other half of the pig. On the morning of the slaughter Arūnas and Donatas met with Tomas at the farm where the pig had lived its full and happy life. The boys gently coaxed the pig to a quiet corner where it met a swift and stress free ending. Tomas then set to work, expertly cleaning the animal, inside and out.

The local method for dehairing pigs is to burn the hair with a high temperature gas flame and then scrape off the blackened hair. This process is repeated a number of times before plunging the pig into hot water to clean it thoroughly. A portion of the belly was deftly removed to allow for disembowelment and removal of the precious organs. Unfortunately the blood was lost – I would have liked to use this to make black pudding. However, all else was saved. The organs were shared equally amongst Arūnas and Donatas while Tomas took the bowel for use in sausage making.

About two hours after he’d left the house Arūnas arrived back with our half of the carcass for me to butcher. I was waiting, knives in hand, ready to get stuck in. I always buy my fish whole and am well-practiced at filleting them. I also butcher chickens on a regular basis and consider my knife skills quite proficient. I had attended the “Pig in a day” course at Ballymaloe cookery school a while back and felt I was well prepared for the challenge ahead. Being faced with a 5 kg salmon or a 60 kg side of pig are not quite in the same league, though. I stared at it for quite some time, pondering where to make my first incision. I walked up one side, down the other, then flipped it over. I did this several times before calling on Donatas, who butchers his own pig every year, for some advice.

There’s no right or wrong way to butcher an animal – it really depends on which cuts of meat you wish to obtain. Popular cuts vary from country to country. The loin pork chop that would be ubiquitous in Ireland is not very popular here in Lithuania. It is very common, however, to remove the loin in its entirety for smoking. Roasts with crackling skin are also not common here. Instead, the skin and fat are removed together for salting or smoking and are used as flavouring in cooking and sausages. Thus, Donatas’s advice was to start by removing the skin and fat from the back to access the loin. This I did quite dexterously, despite my inexperience. My practise with the chickens came into play as I nimbly removed the loin and the fillet with hardly a nick out of either. I did, in my impatience and exhaustion from hauling a 60 kg carcass, accidentally cut off the top of the fillet when I removed a section of shoulder to allow for greater access to the loin. I’m not too fussed – there’s a meal in the remainder of the fillet as it is. 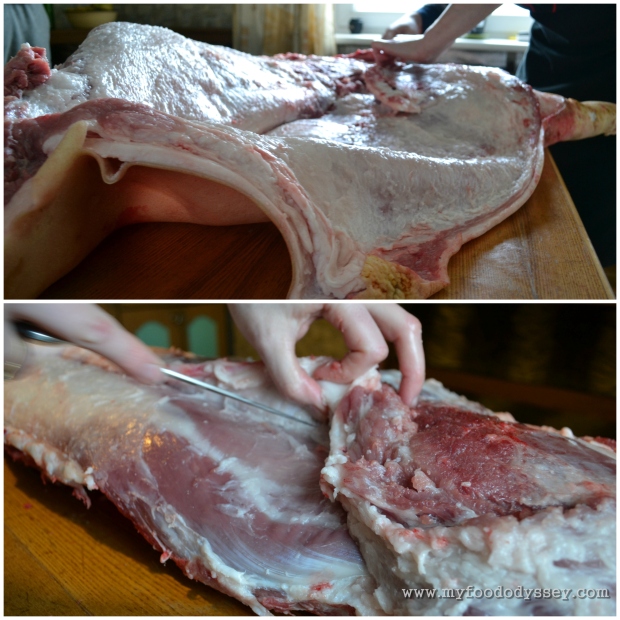 It took me two days to fully complete my butchery of the pig. I brined the head, trotters and tail and made a delicious pressed brawn that will keep us in lunches for many days. I have some belly salting for bacon – it will be ready in a few days. We have enjoyed meals with the offal and the ribs. The remainder has been cut into portions for frying, roasting or braising. Any off cuts were ground into minced meat for burgers, sausages, lasagne and a million other uses. All were bagged, dated and frozen for future use. I am currently trying to source some lye to make soap from the remaining fat.

By the time the last bag went into the freezer I was totally exhausted, but very happy with my work. I know that we will be eating organic and ethically sourced meat. I have learned a huge amount about the anatomy of a pig and what cuts come from where. While I have ended up with some cuts that would not be typical in Ireland I am happy that they suit our current needs. I may cut future pigs differently if our needs change. If I was to do one thing differently it would be to wait a day before beginning to allow the carcass to cool fully. This makes the meat easier to cut and results in cleaner lines. I had wondered why Donatas was casually drinking coffee with Arūnas and not rushing home to butcher his half – experience at work! I learned later that Donatas and his wife had butchered their half in just a few hours the following day. I think it will be a while before I can do it that quickly, but I definitely expect it to be easier next time round. In the meantime, on with the eating!