This is my favourite tree. Is it insane to have a favourite tree? Possibly. I don’t really care. In fact, if I’m honest, I don’t believe in insanity, no more than I believe in normality. What’s normal in one part of the world might be considered insane in another. The fact is, they’re just different. If we’re going to apply labels I’d prefer to hold with the Mad Hatter and say “We’re all mad here”.

Anyway, back to the tree. A few months back, just as the leaves were turning brown and falling from the trees, Arūnas drove me round Adakavas to photograph the beautiful autumnal colours. The sky was clear blue and the sun was just tipping low, creating prefect light for taking pictures. The drive took much longer than originally planned as I jumped out of the car ever few hundred metres to capture something beautiful.

This tree roughly marks the halfway point on the route I take when walking the dog. We are surrounded by a number of forests, yet it is this lone tree that always grabs my attention. I have no idea why. I could philosophise that it’s a metaphor for standing tall and firm by yourself, without the need for support from others. But really it’s just a pretty tree. 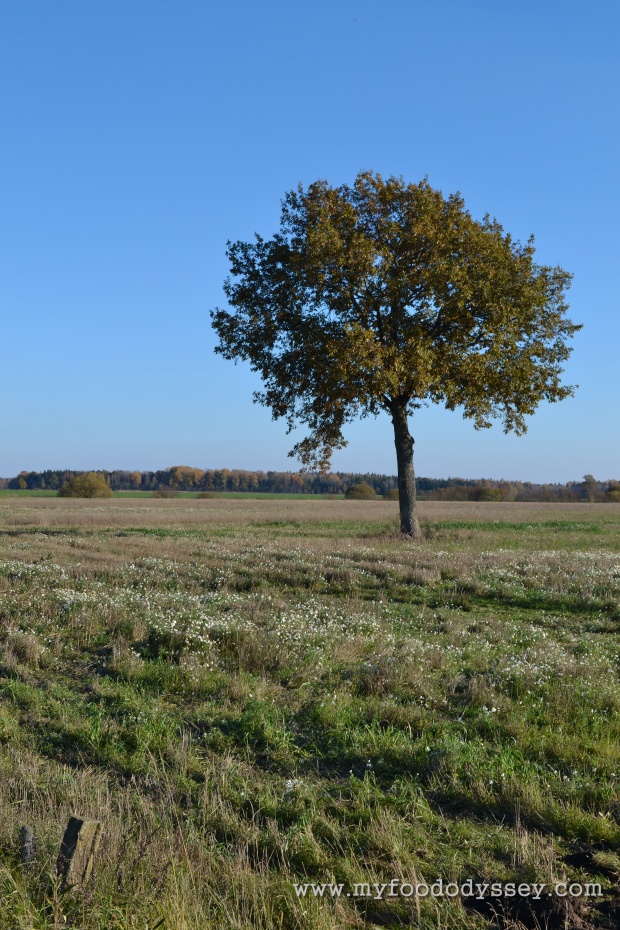 This particular day I snapped a few photos of the tree as we drove towards it from the sunny side. They were not particularly interesting photos but I’ve captured the tree before with the moon and stunning sunsets behind it and I thought it might be interesting to have these for comparison. Less than two minutes later we drove behind the tree so that the tree was now between us and the sun. I could not get over the difference in atmosphere created by changing perspective by just a few hundred metres.

I’m not sure which photo I prefer. Some days it’s the sunny one, others the shadowed one, still others the one with the moon. It remains my favourite tree.