This time last year I was pining for a little taste of home. Halloween was coming and I was looking forward to a steaming bowl of colcannon, just like my mammy used to make. Unfortunately, I could not find any kale or green cabbage, a key ingredient of the dish, here in Lithuania. I tried several supermarkets and farmers’ markets, but only white cabbage was available. Upset, I consoled myself with cake.

This year I made sure to plant both kale and Savoy cabbage so that I could make colcannon during the autumn months. Colcannon is a wonderfully comforting dish made with creamy mashed potato and dark green kale or Savoy cabbage. Like all traditional dishes, recipes vary from home to home. Growing up in the late 70s and early 80s, when butter was bad for you and to be avoided at all costs, butter did not feature in our colcannon. Instead, mam would use plenty of warm, creamy milk. I also don’t remember her adding spring onions (scallions), as mentioned in the famous song. However, since I started making my own colcannon I find that a little onion green adds to the warming, comforting qualities of the dish.

While we ate colcannon many times over the autumn months, mam always, ALWAYS made colcannon for Halloween. As with the barnbrack, she would hide a ring, rag and coin, each carefully wrapped in white baking paper, in the colcannon. Whoever found the ring would get married first, whoever found the coin would be rich and whoever found the rag would be poor. There was always great fun at the table when one of the items was found. We could never remember from year to year who had found what, so we always treated the predictions as new and, naturally, true!

I usually test my recipes at least three times before I share them with you and am often a bit tired of the dish by the time I post the recipe. I have made at least six pots of colcannon and there is no sign of me tiring of it. For one thing, it’s so incredibly versatile. It goes with a rich stew, saucy pork ribs or alongside a juicy steak. It’s also delicious on its own. The kale and spring onions make it more interesting and colourful than plain mashed potato without taking away the joy that is mashed potato. I’m just glad that I planted a late batch of kale in my garden so that I can enjoy many more bowls over the coming months.

* You can substitute flat kale, collard greens or Savoy cabbage. 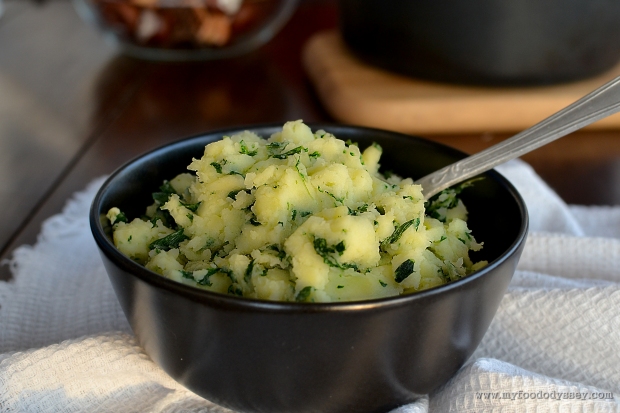