During one of our summer barbeques one of the neighbours’ kids walked into the kitchen where I was preparing food. “Can I have some ass?” he asked. Excuse me?! I could tell by the sincere look on his face that he wasn’t saying what I thought he was.

Ahh – gira! Now I understood! Gira is a soda drink made from fermented bread that is very popular in Lithuania. I had never seen or heard of it before I came to Lithuania and assumed it was a Lithuanian creation. As such, I had never sought out the English word for “gira”. It turns out that the English for “gira” is “kvass”, which was clearly printed on the front of the bottle in the fridge. I’d never heard the word before.

A quick online search confirmed that kvass is a well-known drink across Central and Eastern Europe, probably dating back thousands of years to when people first discovered the yeasts and fermentation that brought us bread, beer, wine and other long-lived staples. While in Europe it is primarily made from dark rye bread, kvass made from beetroot or fruits is popular in other parts of the world.

I have to admit that my first experience of gira wasn’t one I enjoyed. Many years ago (before I met my husband) there was a Lithuanian supermarket beside our work offices in Dublin. One day I ventured inside to see what sort of products were available. There were some things that I recognised, but most were new and mysterious. I spotted a half-litre can of gira. Being that the only other beverage I know that comes in a half-litre can is beer, I concluded that this must be some of beer and decided to give it a go. I popped the can in quiet anticipation of a delicious, malty beer. The taste took my breath away, perhaps just because it was so unusual, so new to my palate. It’s a taste that’s hard to describe – like over-toasted rye bread mixed with some frothy beer. Which, it turns out, is pretty much what it is! 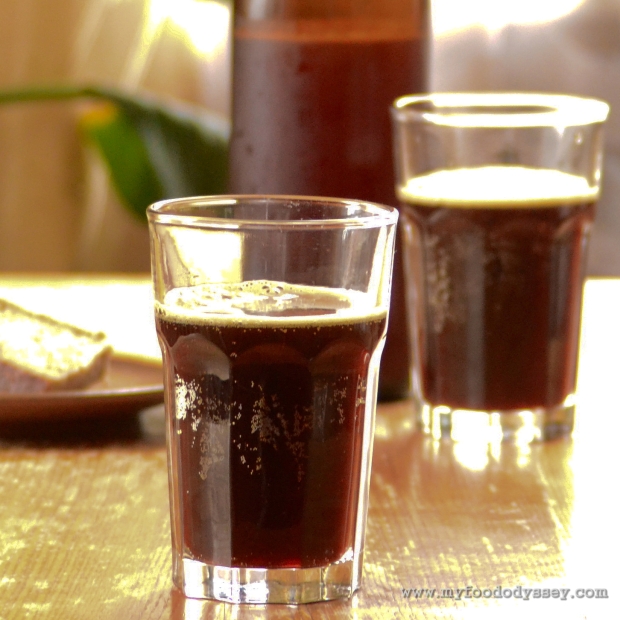 I have since become a big fan of gira, especially the homemade ones sold on draught in many bars and restaurants. Friends and neighbours described how simple it was to make – toast some stale rye bread until it is very dark and hard, soak in boiling water to create a kind of bread tea, add some sugar and yeast and Bob’s your uncle. As part of my journey into self-sufficiency and making the most of inexpensive, local ingredients I decided to give it a whirl.

Clearly, I made a few mistakes along the way. After several days impatiently waiting for my concoction to ferment I ended up with what can only be described as – well, beer. Woe is me! The bottle let out a delicious sound as I popped the cork and poured the dark, effervescent beverage into a tall glass. It was divine! Gira is advertised as being no more and 1.2% alcohol but is typically much less than that as it is a drink enjoyed by adults and children alike. My gira was definitely an adults-only brew – while I can’t be quite sure what the alcohol content was, the warm and dreamy feeling in my stomach told me it was well above 1.2%.

Alas, my supply didn’t last too long, especially when dear husband discovered it. I’ve spent the last few weeks desperately trying to figure out where I went “wrong” so I can recreate it. When I get the recipe fully finalised I’ll share it here. (Maybe!)

In other news, I’ve started to crochet again after a 25 year hiatus. While on our recent trip home I found my mam’s old collection of knitting needles and patterns and several bags full of wool. As winters here are cold and we’re on an economy drive I thought I’d put the wool to good use and make some hats, scarves, gloves and socks. After a slightly shaky start, with initial rows being ripped back a number of times, I have ended up with a very cosy hat complete with (essential) ear flaps and (non-essential but fun) tassels. A matching scarf is now in progress.

This morning I accidentally woke up on “old” time, giving myself an extra hour of living to enjoy. Mistakes are wonderful. Life is good.