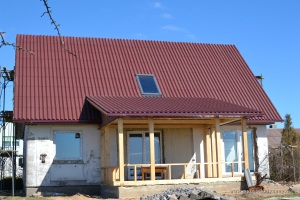 A lot has happened since I first launched Project: House back in January and I realise it’s time I gave you an update.

Progress in January was slow as heavy snows impeded any work on the house itself. Much time was spent poring over Pinterest and interior design magazines such as Country Living for inspiration. We printed off drafts of the plans and set to working finding contractors. We will be managing the overall project ourselves and will complete some of the work, in particular the interior décor, but we need professionals for the roofing, construction, windows, plumbing and electricity.

When the snow finally melted in early March work started in earnest on the renovations. First up were the windows and glass doors. We are adding two large glass doors to the front of the house to take advantage of the fantastic views and the light afforded by the southerly aspect. Adding these doors meant cutting through 40 cm concrete walls. The guys who were installing the windows broke their jackhammer on the first day and refused to complete the work, forcing Arūnas to source a higher calibre jackhammer and complete the task himself. He wasn’t the better for it for several days! Once the doors were installed he agreed that it was worth the effort – the light now floods into the house giving it a warm and spacious feel.

Next to start were the roofers. The old asbestos tiles were removed and the timbers beneath replaced. We chose new tiles that were as similar as possible to the original to preserve the look of the house. I really love the colour – rich, but not too bright. The roofers also installed the Velux windows and constructed the timber frame for the conservatory. We changed the angle of the conservatory roof to facilitate the Velux window on the first floor. This window will form the centrepiece for a new seating area on the landing offering views out over the countryside.

While the exterior walls on the ground floor are constructed of concrete the upstairs walls are timber and not very efficient and keeping out the severe winter temperature or retaining precious heat. Rather than rebuild these walls we are adding thick insulation and covering this with timber cladding. While the roofers worked on the insulation Arūnas was hard at work painting the wooden boards. We tried to pick a colour as close as possible to the colour of the roof tiles. It still needs another coat, to which we may add an extra hint of red, but I absolutely love the overall effect. The wood gives the house a warm and cosy feel and is very much the country, homestead look I had in mind.

The glass for the conservatory windows has been ordered. There will be a large 2.5 metre pane the in centre at the front and a massive 3 metre patio door on the east (right) side. As you can see from the photo the walls of the conservatory are very low so this will be a gloriously bright space with virtually uninterrupted vistas in every direction.

Back in February I made a video of the interior of the house. The video was really more for ourselves as a diary of the changes so I never shared it. I have now added it to YouTube. If you want a good giggle at my TV manner go on and take a peek!