Few places I’ve visited have struck me as more insignificant that the tiny village of Camembert in Normandy. Having travelled a considerable distance to visit the birthplace of the iconic cheese, I was incredibly underwhelmed. The village itself consists of a handful of houses, a church, a tacky cheese museum and an even tackier Tourist Office, which seems to concern itself primarily with selling cheese-related trinkets and tasting plates of Normandy cheeses, as well as presenting a small amount of information on how the various cheeses are produced.

As a small mercy, I was delighted to find that the information was presented in English as well as French so that I could understand the distinctions between the cheeses.

There are four notable Normandy cheeses – Neufchâtel, Livarot, Pont L’Évêque and of course the famous Camembert. All four cheeses are somewhat similar in that they are soft or semi-soft cow’s milk cheeses. The most immediately discernible difference is their shape – the Camembert & Livarot are always round, the Pont L’Évêque square or rectangular, while the Neufchâtel comes in a variety of shapes, but is most traditionally heart-shaped. The second obvious difference is that the Livarot and Pont L’Évêque are washed-rind cheeses, giving them a rind with a colour from golden yellow to dark orange, while the Camembert and Neufchâtel both have a slightly furry, white rind.

All four cheeses are protected by AOC (Appellation d’Origine Contrôlée) rules governing their provenance, ingredients and methods of production. Both the Camembert and the Livarot must be made with raw, unpasteurised milk. The milk for all four must come from specific regions, different for each cheese but all within the Normandy region. Unfortunately the AOC system doesn’t prevent the names being used elsewhere – versions of Camembert are produced worldwide (frequently, with pasteurised milk). However, only those produced in accordance with the rules can use the “AOC” label.

The strongest and most pungent of the four is the undoubtedly the Livarot, a result of the continuous washing (with both water and vegetable oil) during the long, 3-month maturation process. The result is a distinctly cow-like smell and a deeply flavourful cheese. This is not a cheese to accidentally leave in the car on a warm day! Fully ripe versions of the other three, which all take about 5 weeks to mature, also have great depth of flavour, but are more delicate than the Livarot.

A batch of Camembert maturing at François Durand’s farm in Camembert.

The angle is not me after sampling too much brandy! The racks are tilted.

I asked the rather sullen lady at the counter if there were any cheese producers in the village. She advised me that there were none in the village itself, but that one could be found about 3km outside the village. We headed down to the farm, where we watched a video on how the cheese is produced and had a look around the production rooms. We even got to meet the cheese maker, who reminded me enormously, both physically and in manner, of the scientist, David, played by Hank Azaria in “Friends”. We sampled the cheese and it was undoubtedly the best Camembert I’ve ever tasted, even if a little under-ripe. We bought a box and were noddingly advised to let it mature for at least another week before eating it. I wrapped the box in plastic so as not to be tempted and did as instructed. When we finally succumbed, it was oozingly soft in the middle and utterly delicious. 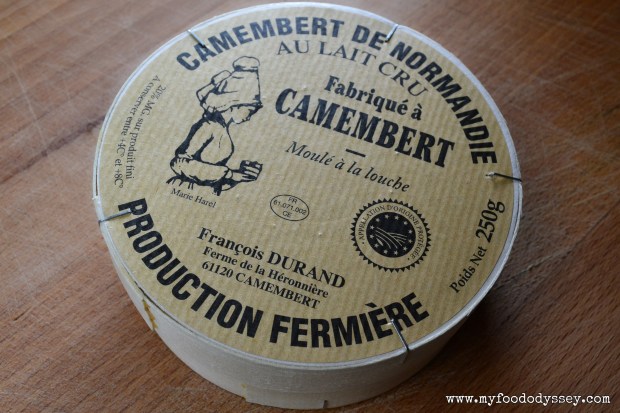 A balanced cheese plate would typically consist of 3-4 different but complementary cheeses, such as a soft, creamy Camembert, a washed-rind Livarot, a rich blue Roquefort and a hard Comté. Putting similar cheeses together on a cheese plate would be unusual. However, in the case of the Normandy cheeses, I think it is useful to taste all four cheeses – the two washed-rind and the two white-rind – side-by-side to appreciate their subtle differences. Choose ripe, AOC cheeses and allow them to sit at room temperature for at least two hours before serving. Serve with crispy, fresh baguette, crunchy sliced apple and a glass of chilled Normandy Pommeau or a mug of dry Normandy cider.

Note: It’s unlikely you’ll find AOC versions of these cheeses in a supermarket, but they should be available from a good cheesemonger or speciality food store.