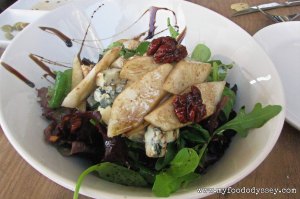 Tapas bars are ubiquitous in Spain. A bit like the “chipper” back in Ireland, even the smallest towns and villages seem to have at least one tapas bar. Not only that, but they tend to be good quality. While some are undoubtedly better than others, I did not encounter a single tapa that I didn’t enjoy on my recent trip through Spain. From San Sebastian to Santiago and Seville to Antequera, all of our investigations met with positive results.

Tapas are heaven for me for several reasons. For one, I don’t really have a big appetite, but I like to try lots of different things so I don’t want to order just one dish. At home I have been known to order two starters – the second as my main course – precisely for this reason. I am also painfully slow at deciding what I would like to order. I have developed a habit of arriving at a restaurant about 10 minutes before my dining companion so that I have time to peruse the menu uninterrupted and in detail without delaying our meal. Tapas suit both of these idiosyncrasies perfectly. I can simply order lots of tiny items without worrying that I’ll be too full or that any food will be wasted. Finally, tapas bars and restaurants tend to have a rustic and relaxed charm, which appeal to my sense of simplicity, without stinting on quality. 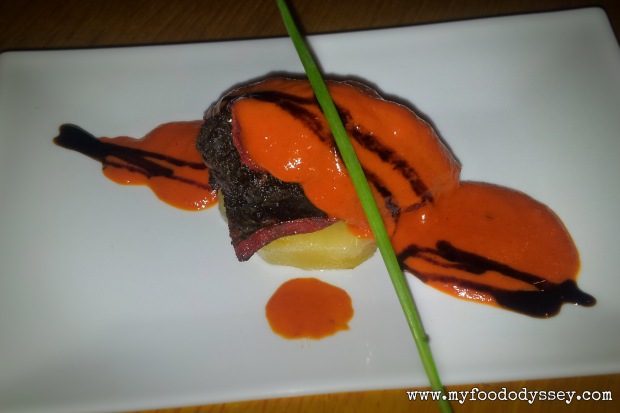 There is some debate as to the origins of the name “tapas”. The theory I’ve heard most frequently, and the one that rings truest to me, is that small plates were originally used in bars to keep flies out of your drink (“tapa” being the Spanish word for “top” or “cover”). The plate would frequently carry a morsel of food, both with the intention of making use of the plate and to raise the thirst levels, thus encouraging further drinking. In some Spanish bars the custom of serving a small, complimentary tapa with a drink still continues.

Tapas have come a long way since those early days and are now available in extensive varieties, frequently of very high quality. There are some regional variations. The “pinxtos” (pronounced “pinchos”) of the Spanish Basque region are generally served on a slice of bread. I have seen similar presentations in Santiago, but with non-bread varieties also available. In Andalucía I did not encounter any tapas on bread, although bread was frequently served on the side (generally as breadsticks) and sometimes made up part of the dish. In Antequera, where I spent a number of days visiting my cousin and his family and where I subsequently did a large portion of my tapas tasting, they make a very interesting tapa called “porra” using bread as the main ingredient. The bread is blended with tomato, garlic and olive oil to form a thick paste. It is served chilled, usually garnished with slices of hard-boiled egg and some slivers of jamón. Simple as it sounds it really is delicious on the side of a cold beer in the hot afternoon sun. 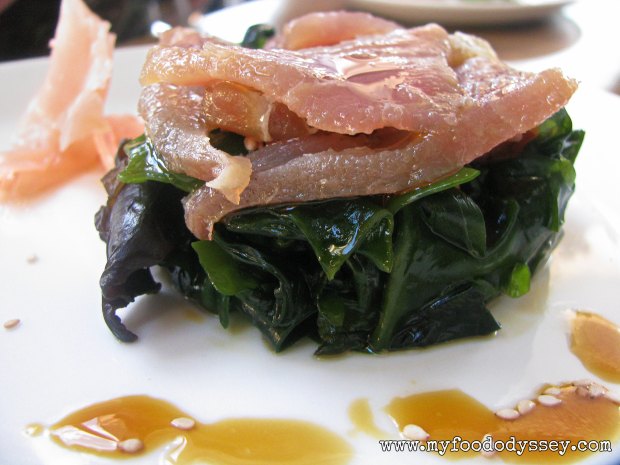 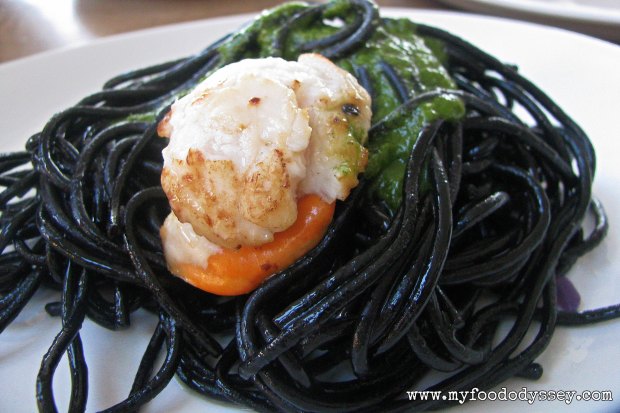 San Sebastián is a veritable hub of excellent restaurants, currently boasting 14 Michelin-stared establishments. To many, the best tapas in the world are to be found here. Alas, we didn’t get to try any. Having driven solidly for a good number of hours to escape the incessant rain in France, we were thoroughly exhausted when we eventually rolled into San Sebastián. The size of our van also puts us at a disadvantage as parking anywhere “downtown” is always tricky. Add to that the fact that I hadn’t yet been able to source a guide book in English to advise on where to eat – dining in San Sebastián just wasn’t destined to be. I regret that we missed this gastronomic opportunity as I’m not sure when we’ll be back to San Sebastián again. I definitely will not miss out twice!

Our first tapas of the trip were in Santiago de Compostela. As it was our first night out in a while, we walked through the warren of restaurants looking for one that might have some atmosphere. We found a spot that was nicely packed and were lucky enough to get a table quickly. With Santiago being such a popular spot with transient tourists we really weren’t expecting too much from the food. However, we were pleasantly surprised by both the variety and the quality of the tapas. We stayed reasonably safe, ordering garlic prawns, patatas bravas and calamari. I also fancied some pickled chilli peppers, but as the menu was all in Spanish I couldn’t them. Our waitress confirmed they were available and went off to place the order. What arrived were not chillies, but grilled mini green peppers. They were smoky, salty and delicious – a delightful surprise. The others were not earth-shattering, but were perfectly adequate. 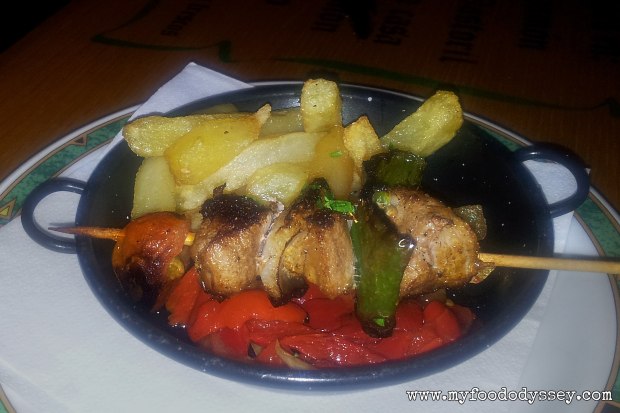 Now armed with a well-thumbed guide book, tapas hunting in Seville was a completely different matter. It was ludicrously hot in Seville, even at 7:30 in the evening, so we took the easy option and chose the most highly rated tapas restaurant in the book simply to avoid any unnecessary walking. Despite a surly waiter we were very happy with our experience. Two of our dishes stood out in particular – the cured tuna with seaweed and the scallop with squid-ink pasta.

Undoubtedly, the tapas highlights of our trip came in the small town of Antequera, about 30 minutes north of Malaga. My cousin lives there with his family and, as I hadn’t seen him in years, we made sure our route took us this direction. I knew little about Antequera except that it was surrounded by mountains. It turns out to be one of the most stunningly beautiful towns we passed on our trip. Despite a population of 45,000 people it is a compact little town with a maze of narrow streets. And it seems like every one of those streets has at least one tapas bar. 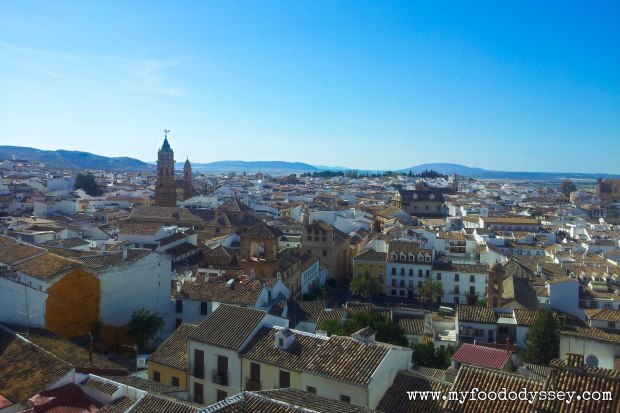 The stunningly beautiful town of Antequera.

We arrived in Antequera around noon and Peter (my cousin) suggested that we grab a quick tapa before lunch. I thought I must have misunderstood – tapas before lunch?! Apparently, this is quite common in Andalucía and in Antequera in particular. He took is to a charming restaurant, La Quinta, which had a huge terrace with stunning views, where we sampled “porra” and some other delights. Peter smirkingly advised us later that they don’t normally allow tapas on the terrace, but had made an exception because I was a food critic from Ireland!

Later that evening we went to a restaurant called “Nico’s” for more tapas. It was a small and unassuming restaurant, but Peter had given it the thumbs-up, recommending a few dishes in particular. The prices were very good so we ordered everything that Peter had suggested, plus a few extra. We had prawns in garlic oil with a tiny fried quail’s egg, pepper stuffed with morcilla (a type of black pudding), calamari and a simple kebab of pork loin. All were beautifully presented and all were completely delicious. We were so impressed that we ordered a second portion of both the calamari and the prawns. I’ve eaten calamari all over the world and none compared to the calamari at Nico’s in Antequera. 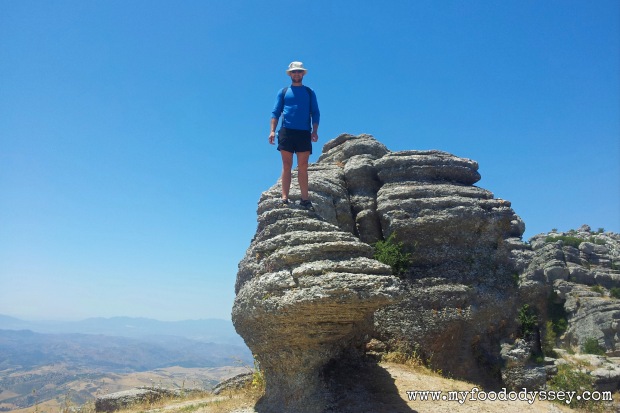 We enjoyed Nico’s so much that we returned the next day for our lunch. We were again impressed, this time with a plate of “bonquerones fritos”, or fried unsalted anchovies. The tiny fish were coated with a very light batter, fried to perfection and served simply with a squeeze of lemon and a pinch of salt. They were an unexpected delight.

Our tapas journey ended in Antequera. From there, we headed towards Valencia, which is Paella country. Our guide book had very little to say about eating in Antequera, which is a real shame as there are some genuine gems to be found. For me, the real highlight of Antequera was getting to spend some time with Peter and his family, but it is a place I would happily visit for the food and scenery alone. I will, most definitely, be back.