I’ve always loved Port. It reminds me of Christmas, of overindulgence on Stilton and crackers, of spicy pudding and squabbles over Monopoly. Sherry, too, reminds me of Christmas. Someone would invariably give us a bottle of Bristol Cream, which would sit in the cupboard until some elderly neighbour came to visit and fancied a sip of the overly sweet syrup. Brandy (generally cognac) was always considered a luxury and was saved for very special occasions, sometimes mixed with a drop of port for added exorbitance.

As part of my recent Diploma in Wine & Wine Culture we had one evening devoted to port and sherry. I was very surprised about how incomplete my impression of sherry had been – some of the examples we tasted were really quite impressive, ranging from very dry to sweet and unctuous. I was determined that I would discover more about these two fortified wines as part of My Food Odyssey. As brandy is a necessary element of fortified wines, and as I’m damn fond of the stuff, I decided it was only logical to include Cognac, particularly as it was en route. 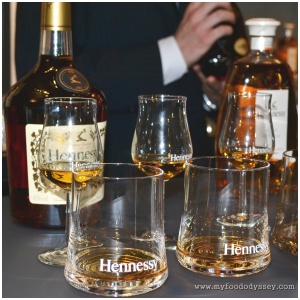 It was a dreary day when we arrived in the small town of Cognac. We made our way to Hennessy – probably the most prevalent brand of cognac in Ireland, which is not surprising given that it was founded by an Irishman. With mists of rain falling I wasn’t looking forward to the boat-trip element of the tour, though thoughts of the tasting at the end of the tour cheered me up a little.

The tour was interesting, if a little staged in places, with plastic vines and fake smoke giving the impression of barrels being fired. However, at €11 including a tasting of two cognacs, it was incredibly good value.

Grapes for cognac can only come from the designated Cognac region. In a similar manner to champagne production, cognac producers do not have their own vineyards. Instead, they buy grapes from a number of individual vineyards throughout the region. Hennessy has about 1,400 growers.
It takes 12kgs of grapes to produce 9 litres of wine, which in turn produce 1 litre of spirit. No wonder it’s so expensive! After picking, the grapes are pressed for 2-3 days, then fermented for a further 5-7 days. The resultant wine is distilled twice in a copper still. The large vat in the centre of the still (shown above) is a wine warmer. It heats up the next batch of wine, ready for distillation. This slow heating of the wine adds to the finesse of the final brandy.

After final distillation, the brandy is aged for anything from 5 to 200 years. Each batch has different flavour characteristics. To make their XO Cognac, Hennessy blends 100 different brandies. They blend in batches of 5 brandies, with the resultant blends being further blended until the Tasting Committee decides it matches the house flavour profile. (Where can I apply for a job on the Tasting Committee?) A similar process is followed for their VS and Fine cognacs, but with just 40 different brandies being used in each.

Cognac blending. The individual brandies are grouped in batches of five. The resultant blends are then further blended to create the final product.

Porto is a wonderful city – probably our favourite city of the tour. After a fascinating lunch at the fish market we headed off in search of port. Technically, the port houses are not in Porto itself, but in an adjoining town called Vila Nova de Gaia, situated on the other side of the Douro river. There are 32 different port houses so selecting one for a tour was a bit of a chore. We decided on Cockburn’s because it is an actual, working port house – the others are more like museums. 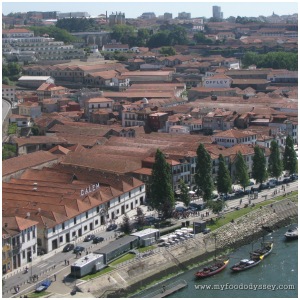 The Port Houses – there are 32 in this one suburb.

There were a number of tour options, each including the same guided tour but ending with a tasting of different ports. We chose two different tours so that we would get to taste a good selection of ports – six in all. We were told that the tour would start “in ten minutes”, but it was more like forty-five before it began. Thankfully, we were given a port to sip while we waited – their white port, which smelled of apples and tasted delicious – not nearly as cloying and sweet as I’d expected. We laughed between ourselves as we heard new arrivals being told the tour would start “in ten minutes”!

To create port, the grapes are first fermented into wine. Uninterrupted, wine will continue to ferment until it reaches about 15% alcohol, at which point the yeasts are killed by the alcohol. In the case of port, fermentation is stopped early by adding a high-alcohol grape spirit to the wine, thus pushing the alcohol beyond 15%. This results in a sweeter wine, as not all the sugars have been converted into alcohol.

The ports are then aged in oak barrels. There are over 70 million litres of port aging at Cockburn’s, beating Taittinger by a country mile! They are stored in a variety of vat sizes, from small 550 litre barrels for the tawny port to huge 90,000 litre barrels for the ruby port. The wine-to-wood ratio has a huge impact on the final wine – the smaller the barrel, the more woody the wine.

One of the bigger blow-outs of the trip occurred in Porto. We had parked a few kilometres out of town on the north side (the left side in the photo below), and had been touring the city on our bikes. The two towns of Porto and Vila Nova de Gaia form a kind of bowl, with steep banks on either side leading down to the river.

We had cycled across from Porto to Vila Nova de Gaia using the railway bridge (the higher bridge in the photo below), and then descended to the river bank in Vila Nova de Gaia to view some of the port houses. On the way back we travelled the lower car bridge, leaving us with a steep climb on the other side.

We were looking round for a suitable route when Arūnas (the fitness fanatic) hopped off his bike at the bottom of a set of steps. Picking up his bike with one arm, he looked back at me expectantly.

The railway and car bridges, Porto.

“You must be joking”, I said, incredulous at the notion. I could only see about 20 steps before a return – who knew how many steps might lie beyond. Scoffing at my lack of fitness and unwillingness to “row in”, he picked up both bikes and began his ascent.

200 steps, there were. 211, to be specific. I was carrying nothing but my small backpack and I had to stop for air several times. The steps were uneven and steep. We had to navigate laundry strung from one side to the other as well as numerous wild-looking cats. It was a gorgeous day – the sun was beaming down, adding to the torture. When we eventually got to the top (and took a long drink of water), we got back on our bikes and didn’t speak for quite some time.

The night before my tour of Tio Pepe in Jerez I got 22 mosquito bites, including two on my lips and one on my eyelid, so I was very much in the humour for a tipple to calm my nerves. Despite being only 11am, I opted for the tour that including a tasting of four different sherries.

There are no vintage sherries – all are produced by blending sherries from a number of different years. Sherry is also bottled ready for drinking – no further maturation takes place in the bottle. Despite how many of us might store the Christmas bottle of Bristol Cream, sherry should really be consumed shortly after opening, particularly in the case of the dry, Fino sherry.

My tour included a tasting of Fino, Croft Original, Alfonso and Solera 1847. The Fino was the driest and smelled quite oaky. The Alfonso was also dry, but was a fuller wine with a darker colour and hints of vanilla and honey. The Croft Original was a surprise favourite – a little sweet, fruity and with earthy notes like mushroom or artichoke. (I may have been feeling the effects when I wrote my notes!) The Solera was the sweetest, with deep raisiny flavour. It was very pleasant, but a little too sweet for me.

I rolled out of Tio Pepe without a care in the world, Bristol Cream fading to a distant memory.