It started off as a normal morning. The sun was shining, birds were chirping, Casanova was making a racket in the garden. I was sipping my morning coffee when I heard a knock at the door. It was unusually early for visitors – so early that the door was still locked. I heard Arūnas opening the door, then panicked tones and footsteps running away from the house. I jumped out of bed and ran to the window to see where they were headed, swirls of thoughts rushing through my head. I saw Arūnas arrive at the chicken coop – and then he froze.

My heart stopped. I pulled on some clothes and ran outside. When I got close to the coop I could see feathers everywhere. I rounded the corner and saw them. Tiny, lifeless. I was horror-struck. “Are they all dead?” I asked Arūnas as I scanned the scene for signs of life. “All dead”, he replied in a whisper. Poor hens. Poor, defenceless little hens. Most looked like they’d had their necks bitten. One was fully decapitated and one was open at the belly, but mostly they were intact. Something had killed them just for the sake of killing them.

From the distribution of the birds and the amount of feathers scattered around there must have been quite a scramble. I don’t know how we didn’t hear it – it must have happened in the dead of night. We’re almost at midsummer so we don’t have many hours of darkness, but some cunning creature obviously found an ideal time to strike.

I feel responsible. The fence around the run is over 6 feet high and the top is covered with netting to prevent them from flying out, but there are a few gaps where a small animal such as a ferret could have crawled through. We used to close the pop-hole into the coop at night but since we covered the top with netting we felt they were secure and so we stopped. We liked the idea that they could be out pecking around as early as they liked without having to wait for us. We’re left wondering if that pop-hole had been closed might this carnage have been averted. I guess we’ll never know.

When we first got the hens I used to spent quite a bit of time with them and had names for a few of them. Thanks to Beelzebub’s reign of terror I had been kept away from them for a long time and so had lost contact with them as individuals. I loved them more as a group. I loved watching them peck around the garden, I loved how they ran after me when I went out with the scraps bucket, I loved the life that they added to our little homestead. And, of course, I loved the eggs. They were great layers, even over the winter and during their moult. We were never short of eggs. We could easily go through 10 or more eggs in a day, between making mayonnaise, pancakes, ice cream or even just a simple poached egg on toast. Those eggs will be missed.

We will get more, of course. First, we need to figure out how the culprit got in and reinforce the run and coop so it can never happen again. Then we’ll buy a whole new flock and wait patiently for them to reach the point of lay. In the meantime I’ll miss them and their delightful demeanor. As for poor Casanova, I can hear him crow as I type. Arūnas said he was standing outside the run when he first arrived. I’m not sure what level of comprehension chickens have and whether or not he realises that his girls are gone for good. That realisation is still only sinking in for me – and I don’t like it one little bit. 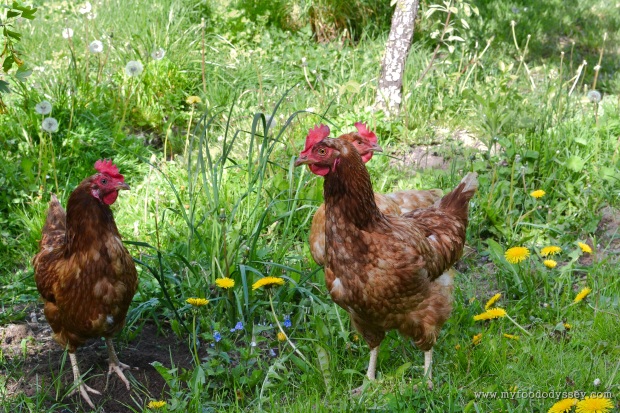