Finally, I have the answer. It’s the chicken. The chicken definitely came first. Six weeks before the egg, to be exact. For six weeks I have been diligently checking the coop every day, patiently waiting for an egg. Friends advised that it might be some considerable time before we got an egg as the hens were so young and their combs and wattles were still quite small.

Recently, two of my bigger girls started developing deep red combs and wattles and I began to feel that the day was imminent. Still, they kept me waiting. I fed them well, I kept their coop clean, I ensured they got lots of fresh air and sunshine.

I have been feeding them a mixture of kitchen scraps, grain, grasses and leafy weeds. They eat almost everything I give them, though I can confirm that they’re not fond of citrus. I have read a number of blogs and books which suggested that chickens be fed a special “layers’ mash” – a combination of grains and other goodies to ensure they have all the nutrients they need for laying. I have had other advice suggesting that kitchen scraps and free-range grazing would produce as many eggs.

I’ve been reluctant to let the girls out to wander the garden since the “dog” incident. The girls are neither as fast nor as feisty as the cock and I feared an encounter with an over-eager dog might result in bloodshed. As they had eaten all the grass and weeds in their run I have been supplying them with lots of grass and weeds from around the garden – they same stuff they would eat if they were allowed to wander freely. 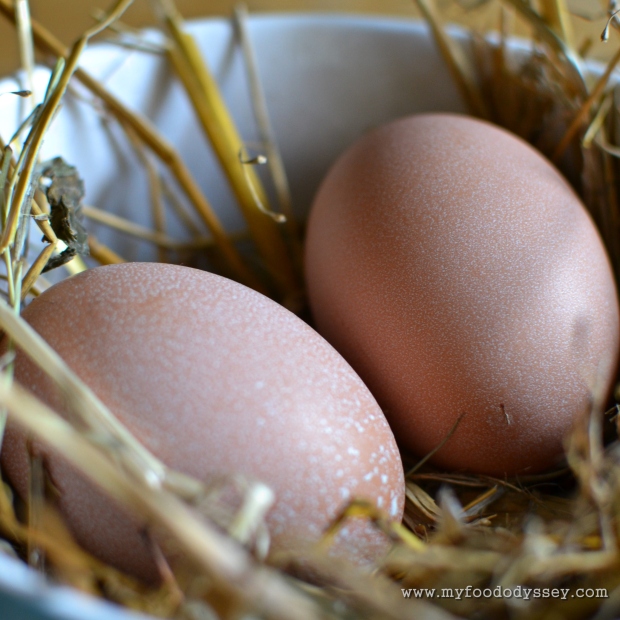 All that and still no egg. Yesterday we ran out of grain and I asked Arūnas to pick some up on a run into town. I suggested that he buy a layers’ mash if he could find one. He did find one and, though it was a little more expensive than the plain grain, we reckoned we’d give it a try.

Less than 24 hours later and I walk into the coop to find these two eggs sitting in a carefully created dimple of straw at the back of one of the nesting boxes. I find it hard to believe that the layers’ mash made the difference in such a short space of time. I guess I’ll never know. But the main thing is, they’ve started laying. I don’t think I’ve ever seen two more beautiful eggs – they just seem to sparkle.

Despite having waited for them for such a long time I find myself reluctant to break them open. I’ll do it tomorrow, when the novelty has worn off a little. Any suggestions on what I should make as my inaugural egg dish? Fried, sunny-side up? Boiled egg and soldiers? A nice crisp meringue? A soft sponge sandwich? The options are endless. That’s the joys of eggs – they have so many uses. I won’t agonise over it too much as hopefully there will be many, many more eggs to come.