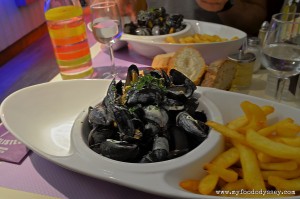 It would appear that life in Normandy revolves, gastronomically speaking, around three key ingredients – seafood, apples and cheese. Thankfully, I’m partial to all three. When we rolled off the ferry into Le Havre we headed straight for the beautiful fishing town of Honfleur, where I’d heard the seafood was fantastic.

We parked just outside the town and pedaled back in on our bikes, both to pique our appetites and so that we might better explore our dining options. The quay, which was bustling with tourists (mainly French, as far as I could discern), had an ample selection of restaurants. We settled on one which looked quite busy, so often a good indicator of quality and value for money, and took a quick look through the menu.

We already knew what we wanted – the “Moules frites” (mussels and chips), which were the house speciality. The only choice to be made was the sauce in which the mussels would be prepared and served. We both opted for the Moules “à la Normande”, which is with cream and a good glug of Normandy cider. They arrived, smiling and golden in their black shells, smothered in a most scrumptious sauce. Being our first meal in France, and our first proper meal of the day, they were devoured with gusto. The traditional accompaniment is a mug of local Normandy cider but, as the day was still quite young, we stuck with water. 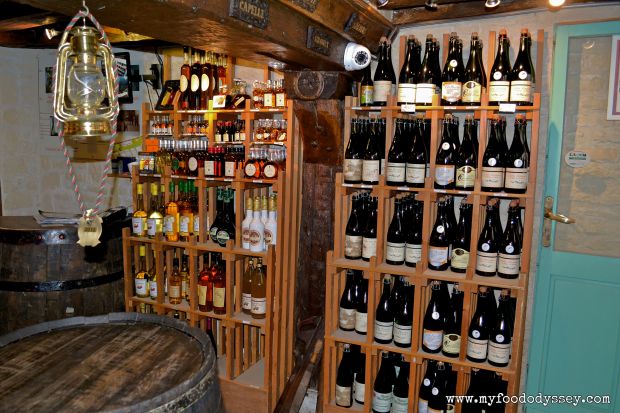 When we had finished, we strolled around the shops, which were largely made up of “caves” (cellars) dedicated to local cider and to Calvados, the famous Normandy apple brandy. I thought my French had taken a turn for the worst when I stumbled on a cider and Calvados tasting outside one cave and couldn’t understand a word of the explanations being given. Thankfully, I discovered the presentation was being made in Russian.

The local tourist office provided us with a map of the “cider route” and we made our way out into the countryside, ready to do a tour the following morning. We spent the night in the picturesque village of Cambremer (not a typo!) and the following morning visited the delightful Pierre Huet, where they produce both cider and Calvados, along with “Pommeau”, a vermouth-like aperitif made with Calvados and apple juice. We had just missed the English tour and opted instead for the one in French. Thankfully, our guide spoke excellent English and the tour group was small, so she was able to clarify any points that we didn’t follow in French.

The estate grows about 300 tons of their own apples each year. Once harvested, the apples rest for a few days before being pressed to extract the must. The must is then either pasteurised and sold directly as juice or is used to produce their three key products – cider, Calvados and Pommeau. For the cider, the must is fermented for 1-5 months, depending on the type of cider required – 1 month for sweet, 3 months for semi-sweet and 5 months for dry.

Under their AOP (Appellation d’Origine Protégée) rules, they are not permitted to add sugar or yeast to the apple must – it must ferment using the natural sugars and yeasts. The cider is then bottled and corked in a manner similar to Champagne, the corks being held in place with metal baskets to ensure they don’t explode. Further fermentation, which takes place in the bottle, produces the gases which create the characteristics bubbles in the cider. Occasionally, they can produce a little more gas than is required and the bottle can explode.

For the Calvados, the cider is fermented for a total of 7 months, after which it is twice-distilled. It is then aged, first is large 1,000 litre oak barrels which are over 100 years old, and then in smaller, newer barrels for a minimum of 4 years and anything up to 30 years.

The Pommeau is created with a mixture of Calvados and the original apple must. It is aged in giant 15,000 litre oak barrels for 3 years, producing a refreshing and smooth drink, somewhat similar to a sweet Martini, with an alcohol content of 17%. This can be served neat or over ice as a pre-dinner aperitif.

A sample of the Calvados premier selection.

We did a tasting of the dry and sweet ciders, the Pommeau and two different ages of Calvados – an 8-year-old and a 15-year-old. The cider was excellent, particularly the sweet – appley and refreshing, with just the right amount of effervescence. The Calvados was good. I preferred the fruitiness of the 8-year-old to the woodiness of the 15-year-old. That said, neither particularly floated my boat. They were fine examples – I think perhaps it was too early in the morning to appreciate fine spirits.

The Pommeau was the discovery of the morning for me. Having never heard of it before today, I was delighted by its smoothness and toothsome sweetness. Served chilled, this would be delicious with a plate of Normandy cheese, such as Camembert or Neufchâtel.

Seafood, apples and cheese, either individually or combined – not a bad food heritage, indeed.