Our beautiful girls have finally arrived. It feels like a monumental step in our self-sufficiency journey and I’m very, very excited. We decided to buy twelve chickens to start. We had the space so we thought, why not? Chickens are sociable creatures and love company. They will also keep each other warm in the cold Lithuanian winters.

Arūnas had constructed a lovely home for our girls out of spare parts from our house renovation project. The walls are made from doors and internal wall panels. The door into the coup is an old wardrobe door and the roof uses the old roof tiles from the house. There are four sizeable nesting boxes and a number of roosting perches. Borrowing from a number of designs I’ve seen online, we included a small opening at the back to check for eggs without disturbing the chickens.

Our neighbours recommended a mix of Lohmann Brown and Barred Holland chickens. Both are good layers and are suited to Lithuanian winters. General advice was to buy pullets – chickens of about 12-20 weeks old who had not yet laid their first egg. Chickens generally start to lay at about 20-25 weeks.

I feel like I’ve been waiting for my chickens forever and the thoughts of having to wait a further 1-2 months before seeing my first egg didn’t appeal to me. As such, we elected to buy four hens that have just started to lay and eight pullets which will come on lay in the coming months. 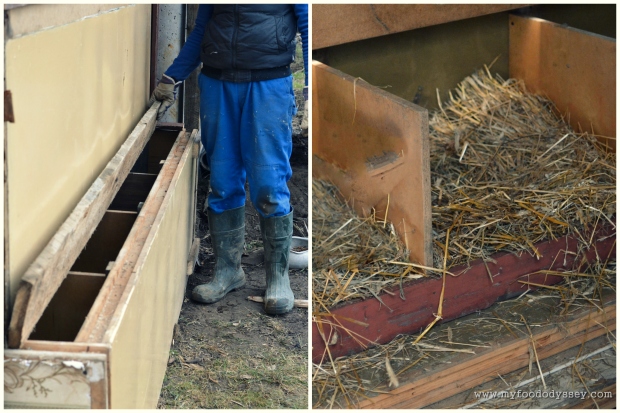 We got up very early yesterday morning to head to Rietavas, home to one of Lithuania’s largest outdoor markets. The market has everything, from livestock to fresh produce, dairy, smoked meats, spices, shrubbery and trees and on to car parts, clothes, handbags and a huge bric-a-brac section. Whatever you want you can find it in Rietavas.

We headed straight to the livestock section to get first pick of the birds on offer. There was a number of sellers, all with similar breeds at similar stages and at similar prices. We spoke to one lady who repeatedly petted her birds as she talked us through their history. Her obvious love for her chickens led us to believe that they had been well cared for and that these were the ones for us.

We chose our twelve girls – four pullet Lohmann Browns, four pullet Barred Holland and four young Lohmann Brown hens that had just started laying. The chickens were carefully placed in sacks, which we were advised was safe and perfectly comfortable for the chickens for the hour-long journey home. After a cursory look around the remaining stalls we headed home, anxious to get our girls settled into their new run.

While the chickens seemed to take to their new surroundings straight away, the dog was more than a little discommoded. From the moment Arūnas lifted the sacks from the car he was on the attack. He tried to grab at one of the bags – Arūnas had to lift them practically over his head to keep him away. Once the girls began to emerge from the sacks he went completely crazy, running all around the run trying to find a way to get in. He found a weak spot in the fencing and tried to bite his way though.

He was rewarded with a few hours tied to his chain. We very rarely tie him up, so I think he understood the gravity of his actions and he quickly calmed down. When we let him off the chain later in the day he had a quick sniff around the run and then went off about his business. We will leave the chickens in the run for about a week before we let them out around the garden. Hopefully the dog will be well used to them by then and cause them no trouble. The neighbours’ hens are in the garden all the time and he never goes near them, so I’m confident that our girls will be safe.

I’ve been checking regularly for eggs, but so far have found none. I suspect the girls might need a few days to settle down after the stresses of the market, travelling and their new home. I await with great anticipation that first little pullet egg, fried or poached to perfection and perhaps with some crispy bacon on the side. Maybe I’ll find one in time for tea – fingers crossed!

PS: I’m an absolute newbie when it comes to chickens, so if you have any advice I’d be more than happy to hear it!